Life almost stole Calum from me.

We barely make it through that trial only to face a final test.

As we try to brace ourselves and weather the brewing storm, we are both rocked by huge secrets.

Calum struggles with the ghost of his past.

I weigh a life-altering decision with the potential to change everything.

We could be so perfect together…

If our secrets don’t drag us under the murky waters.

Don’t fall for your customers.

I can’t believe we’ve finally reached the third and final book in the Broken Slipper Trilogy! This story started out strong with its intrigue, secrecy, and budding lust-fuelled romance between Calum and Kaia. The initial premise is what sold me in wanting to read this billionaire, age gap romance…

But by the second book, it gradually turned into a complicated and overwhelming storyline of problem after problem that only escalated as the story progressed into this final one. Ooo-wee! Calum and Kaia had a lot to deal with in order to keep their relationship going.

To be honest this book was a bit of mixed bag for my liking. The Dancer (book two) left in such a cliffhanger that I was reeling to start this one in order to see the outcome. Unfortunately, that outcome left me a little underwhelmed. For a life or death matter, it didn’t come off as something Calum or Kaia took seriously. I like Vivian’s writing style to have wanted to read this trilogy but I feel like this particular book was rushed, despite the fact that a lot of things still occurred before it ended.

The same problems kept popping up and it was never truly resolved. I felt like Calum and Kaia were sweeping these serious matters under the rug until it bit them in their asses, and by then I lost interest in seeing them fix it because it all felt too repetitive. A few of the issues they encountered in the first two books that seemed like the biggest threats to their relationship were now an afterthought and somewhat brushed off in this book with anticlimactic solutions.

The storyline felt choppy and had a disjointed flow. With the introduction of new characters and relationships, the new developments/ additions into the storyline didn’t feel organic. Whilst I was still invested in seeing Calum’s and Kaia’s relationship through to the end, the side stories that were simultaneously happening in the background didn’t hold my interest as much and ultimately felt like filler in order to put some dimension into the story.

Calum’s and Kaia’s relationship exhibited a lot of repetitive issues that should’ve been resolved a lot earlier. There’s no doubt that they had chemistry and plenty of raunchy romance, but there were also plenty of cracks. I would’ve loved to have seen a gradual development in their relationship full of in-depth discussions about where they would like their relationship to head towards and to work through their differences long before they were forced into doing so.

That wasn’t the only relationship in this story that was tumultuous. I was left frustrated with a lot of the actions (or lack thereof) from Calum and his brother Lucas concerning a certain pivotal matter in their lives. I had trouble agreeing with either one of them but for completely different reasons. Calum buried his feelings unless he felt backed into a corner and then it was like, “let it rip!”

For Lucas, I was baffled with his overall mindset after discovering what Calum had been through. How can a brother overlook a horrific, traumatic event all because it didn’t happen to him?! Ugh, I will never understand. Sigh. 😩

Kaia’s toxic family disputes were equally stressing to the point where I was done with all that drama long before anything was done about it. Even after having had time to process this book, I still can’t quite figure out Kaia’s decisions regarding her family. To each their own, I guess… *shrug*

But it wasn’t all unfortunate.

I liked Kaia’s friendship with her bestie Ella. It may have been a little rocky here and there but they stuck it out and their bond’s stronger than ever. Even though the new addition of characters and relationships were introduced (albeit a little sudden), the inkling of possible future stories had me perking up with interest. And no matter how crazy Calum’s and Kaia’s relationship had been throughout, and even though I didn’t completely agree with how things went down, the final scene with their happily ever after was sweet to witness. Things may not have gone according to plan and situations had to be altered, it was satisfying to see Calum and Kaia be able to move on and begin the next chapter in their lives.

Not going to lie, besides one main plot point that was predictable fairly early on, the conclusion wasn’t quite what I was expecting. But overall, it’s a decent wrap-up to the trilogy. It’s a slow, steady-paced storytelling and told from dual points of view so you get a good idea of each protagonists’ present mindset.

This was my first contemporary romance where a huge chunk of the storyline revolved around the world of ballet, and it was amazing to see elements of it from beginning to end. This may not have been my favourite out of the three books but I would still recommend this trilogy as a whole to fellow romance readers.

If you enjoy the following elements in your romance, this trilogy might be right up your alley:

This is a continuous storyline and each book must be read in order. Also note, this story contains sensitive subject matter that may be triggering for some readers, such as child abuse, rape, attempted murder, violence, harassment, and domestic abuse. It also broaches certain topics such as body image, PTSD, and one’s own personal choices. It contains mature sexual themes suitable for readers 18+ only!

Thank you Vivian Wood and Candi Kane PR for the opportunity to read an advanced copy! 💛

🩰 Read my reviews for the Broken Slipper Trilogy! 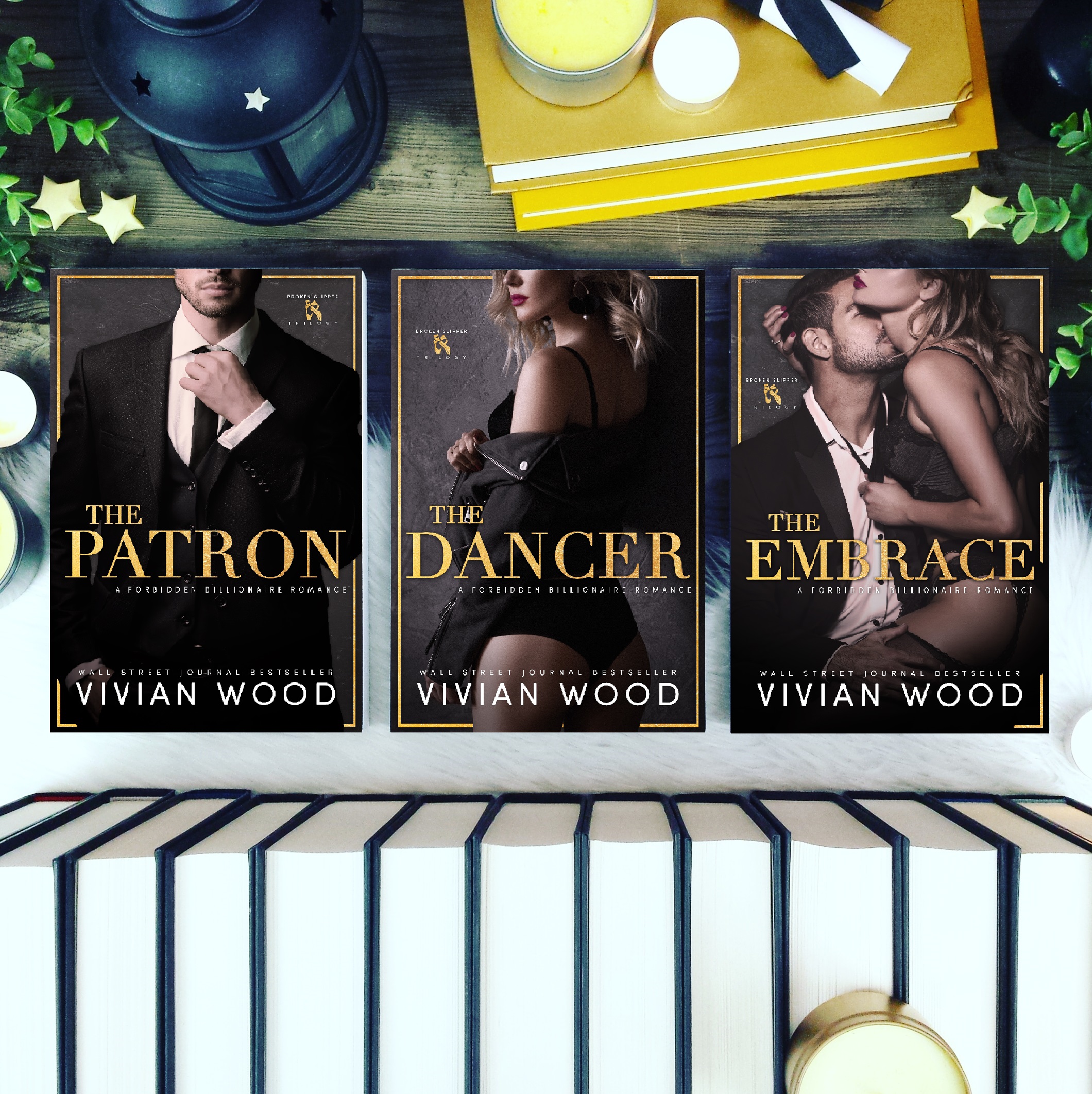 Book One: The Patron by Vivian Wood