I know I’m posting this review a little late. But here it is nevertheless. This was my last read for April. Hope you guys enjoy! 😊 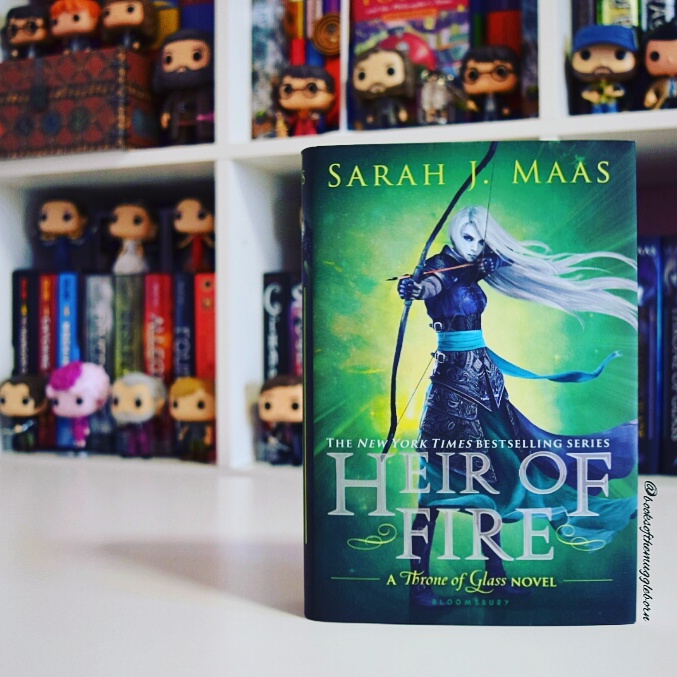 Celaena has survived deadly contests and shattering heartbreak-but at an unspeakable cost. Now, she must travel to a new land to confront her darkest truth . . . a truth about her heritage that could change her life-and her future-forever. Meanwhile, brutal and monstrous forces are gathering on the horizon, intent on enslaving her world. Will Celaena find the strength to not only fight her inner demons, but to take on the evil that is about to be unleashed?

This series just gets better and better!! 😄 This book was worth reading over sleeping any day! I must admit, it started a little slow for me before I started getting into the story but I tell you what… after I was sucked back in..it was downhill from there. The momentum just kept picking up speed and I couldn’t put the book down.

I can’t say I have a favourite book in the series. I just think it’s one long continuous story (which it is, duh) broken into several books. But Heir of Fire is definitely deep into the story now and a lot of things are happening which I find makes the book really action-packed. I didn’t find it at all boring or tedious, in fact it’s another highly recommended read! 😊😊 This series has become one of my favourite fantasy fiction series of all time!

Now if you haven’t read the book, I advise you stop reading from this point onwards. I don’t want to spoil it for you because it really needs to be read and experienced first hand.

Let’s start off with Dorian and his new love interest; Sorscha: I knew when Sorscha came into the scene that something was bound to happen between them. And I’m kind of glad it did because I like Dorian. I may not have said it before because I only had eyes for Chaol but I’ve always liked Dorian too. He’s sweet but I knew he wasn’t meant for Celaena. I’m so glad he’s disposition hadn’t changed much from the first two books to now. He’s still very much caring and not at all like his father. Which I feared he would turn into after the developments between him, Celaena and Chaol. I thought maybe he would become mean but nope. Not at all. Sorscha was good for him! Which makes it all the more sadder that they won’t get to be together til the end. During a particular shocking scene, I was so stupefied at what I had read. In one hand I kind of saw it coming but in the other I was seriously thinking ‘Everything is fine. It’s going to okay’. It just wasn’t sinking in. Not my favourite part of the book at all. No, no.

Next up: Chaol. He, unfortunately was not the leading man in this book and I’ll admit I was not really loving him here either. In all honesty… every time it was Chaol’s part in the book, I just felt bad for the guy. He’s stuck in a mess and torn between so many people. He really needs friends. That’s all I could think of… he just needed friends. I hope it gets better for him in the upcoming books.

The whole deal with the Witch Clan War: This was probably my least favourite parts of the book just because it was hard getting through which clan was which. I mean, there was the Blackbeak, the Bluebloods and Yellowlegs and not to mention the names of each character from whichever clan. I’ll probably have to reread the book again just for this storyline alone. I can’t help feeling I should’ve liked it a lot more. But I will say this – I love Abraxos; that hard-headed brat. 😜 And I love his relationship with Manon! ❤

Finally, Celaena (aka Aelin) and Rowan…

Omg Rowan! How have you managed to worm your way into my heart you big meanie! 😉 *sigh* But I’m seriously not surprised anymore… I’ve read enough Sarah J Maas books to know she does this all the time. Giving us a yummy, sexy character who’s all broody with a bad boy exterior when really he’s just the most sweetest, caring and protective person everrrrr!! 😁 I didn’t think I could love anyone more than Chaol for Celaena but I think I was wrong. Rowan and Celaena just seem to fit perfectly. Two peas in a pod! To me they seem like soulmates. But the way Sarah J. Maas wrote Heir of Fire, it seems like they might just end up being the closest of friends, bonded by their similar experiences in life and nothing more. I really hope there are further developments between them in the next book or so, because I don’t think I can be content with how the book ended with these two! #reallywishing

Book One: Throne Of Glass by Sarah J. Maas