A nanny is what I am.I’m a good one, too.When I’m hired by a biker and his rich woman, I can’t say no.I can’t afford to say no.I’ve never worked for a biker before, and I certainly haven’t worked for one who is this damned moody and did I mention oh, so gorgeous?Still, here I am.I need the money.I need to escape my past.I need something, anything, to make the demons go away.What I didn’t sign up for was the rich bitch he decided to reproduce with.Not only does she hate me, but she’s from the most wealthy family in town.My days are now filled with country clubs, galas and dressing a baby in clothes I could never afford in my lifetime.Did I mention the other nannies?The stuck up ones?The ones who hate me?Yeah, there’s them.Lucky for me, I have him.A connection that’s undeniable.Only, he’s everything I shouldn’t want.A biker? Bad news.I’m their nanny, even worse.Yet, their relationship is toxic.A one night stand gone wrong.An attempt to make things right for a baby he didn’t know he even wanted.I’m not in the position to be in the middle of that…Yet, there’s something there…Something between us that’s undeniable.This isn’t going to end well…

A bittersweet ending to the Turf Wars series. I’ve enjoyed them all, as each one has been such entertaining reads. Clash of the Nannies is a secret/ nanny romance with a bit of a love triangle twist.

What made this book for me was Hugh. Aw swoon! 😍😍 He is probably the sweetest biker/ hero from the entire series, hands down! As the story progresses, you steadily see Hugh’s character growth from a biker with no commitments to becoming a responsible adult needing to take care of another human being.

Maggie is not your conventional nanny. She’s an opinionated heroine and she will put her two cents in for any situation. What made Maggie relatable to me is she’s a heroine of Asian descent—and to be more specific, one of a Filipino background. She represented some cultural diversity not just within this story but within the Turf Wars world, albeit she’s only partly Asian and her mixed heritage doesn’t play a huge part in her character, but it’s still a rarity (at least for me) to find a Filipino character in any of my reads, especially one who plays a main character.

The storyline also broaches on serious subject matters such as social standing, prejudices, and bullying. The experiences Maggie is confronted with are relatable, real-life situations, and although these topics are sensitive, especially for those who can relate, Jewel has written-in determined characters and has tried to keep the overall atmosphere as lighthearted to ensure it doesn’t become too dramatic or deflating.

Overall, another amusing rom-com with minimal MC elements in the background. Just like the previous books in the series, it was told solely from the heroine’s perspective. It’s a relatively short read with fast-paced storytelling, and because of that reason the conclusion ended quite abruptly with relatively quick resolutions (considering it’s the final book in the series). There are plot points that were left unanswered, and unexpected new ones introduced last minute that left me feeling a little taken aback. It was a lot to process in a short amount of time. 😱

I’m not a big fan of the ending, in general. Whilst bonds and friendships were constantly developing and expanding with each new book in the series, with this book it culminated with strong “end of an era” vibes that had me a little taken aback. As I mentioned earlier, it really is bittersweet.

However, putting the ending aside along with the quick resolutions, I did enjoy the growing friends-to-lovers relationship between Hugh and Maggie. It’s a nice change of pace from the enemies-to-lovers/ hate-to-love storylines from the previous books. It centres around Maggie’s day-to-day duties as a nanny in a high society environment. It has great balance of romance, family, and friendship within the storyline that I thought were real winning elements.

I recommend the entire series. Although it’s MC-lite, I honestly didn’t mind that the club was the background as it gave way to each of the hero’s personal life almost outside of it. You still get hot bikers without the dark MC elements. It’s a great series for readers who want to slowly transition into MC romance reads without having delve into the grittiness just yet.

Thank you Bella Jewel and Valentine PR for the opportunity to read an advanced copy! 💗

🧁 More reviews for the Turf Wars! 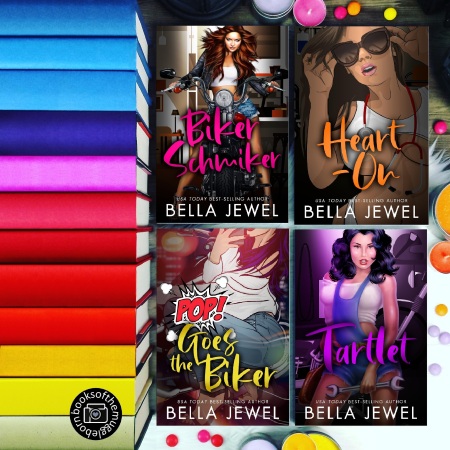