That’s how long it took me to find her.

Five years after my world shattered, leaving me a scarred and broken man.

By then, the girl I knew was gone. In her place stood a woman. One who looked like an angel. An impossible, beautiful angel.

I killed for her. Soaked my hands in the blood of those who hurt her and rescued her from hell.

But hell has a way of following you. Becoming a part of you. Maybe the only part you recognize.

I had every intention of bringing her home. Setting her free.

I swear I did.

But the men who stole her all those years ago weren’t done with her yet. They’d stop at nothing to get her back. And I’d kill any man who tried to take her from me.

She calls me her avenging angel.

But I know the truth.

Because even as I tell myself I’m protecting her I know one thing for sure.

I am a monster, too. No better than them.

Because just like them, I’ll never let her go.

Author’s note: Stolen is Dante Grigori’s story and although a standalone, would be better enjoyed after reading With This Ring and I Thee Take.

Five fucking years. That’s how long it has taken me to find her. And the only reason I did was word circulating about Petrov having been duped.

I climb out of the car at the entrance of The Hudson Hotel. An icy drizzle pelts me as I adjust the collar of my coat before looking up at the penthouse windows more than twenty floors up.

The second SUV comes to a stop behind ours and as Matthaeus flanks me, three more men fall in line behind him. I push my hands into my pockets and walk toward the entrance. A bellman opens the door. I don’t miss the widening of his eyes when the light from a passing car dances across my face. Maybe it’s not my appearance that’s got him freaked. Maybe it’s my entourage. Because we look like trouble.

I make my way to the concierge desk and give the attendant my name. Well, not my real name. The name of the asshole who paid extra to get his turn early in the night. Before she’s used up. He’s dead now.

The attendant can’t quite keep eye contact. I blink, watching him as his eyes move over the eyepatch, the deep, still angry X-shaped scar across my cheek. I let him look. Let him clear his throat in embarrassment as he makes a point of rearranging his desk while asking for identification.

I pat my pockets. “Guess I forgot it.”

He finally forces himself to meet my gaze, his neck and face flushed.

“Envelope,” I say, holding out my hand. I don’t have time for this buffoon.

“Yes, sir.” His hand trembles as he hands the envelope over. He wants me gone and I can’t blame him.

I check my watch. We have to time this exactly right. I walk toward the elevators followed by my men. As if to oblige us, the doors slide open just as we get to them, and we step inside. I rip the envelope open, press the key into the slot marked Penthouse and let the doors slide closed. Matthaeus sets the black duffel bag on the floor, unzips it and hands each of the men an automatic rifle. They have suppressors in place, although there’s really no way to muffle that sound. But if all goes to plan, it won’t matter.

An upbeat tune plays in the background as I stare at my own face in the mirrored doors. I make myself look. Make myself see. I wonder if she’ll be scared when she sees me.

My phone buzzes. I reach into my pocket, take it out, scan the text. Cristiano telling me the soldiers are in place, both inside and outside the property. Chopper is on its way, and they’ve secured our exit.

If I can get out.

Because he thinks this is a shit idea.

But no, it’s not if I get out. I have no intention of dying tonight. Not until I’ve killed that fat fuck Petrov. Not until I’ve buried my knife in Felix Pérez’s gut. Not until I have their blood and the blood of anyone else who touched her on my hands.

He reminds me again of Petrov’s soldiers nearby, the distraction we arranged only giving us minutes inside the suite. He asks one more time if I know what the fuck I’m doing.

So, as the elevator approaches the penthouse, I crack my neck and pull my pistol out of its shoulder holster. Then twist the silencer into place and hold the weapon at my side.

Because tonight is the beginning of their end.

Tonight, I take back what they stole.

📚 Add to your TBR: Goodreads

💍 Read the To Have and to Hold Duet! 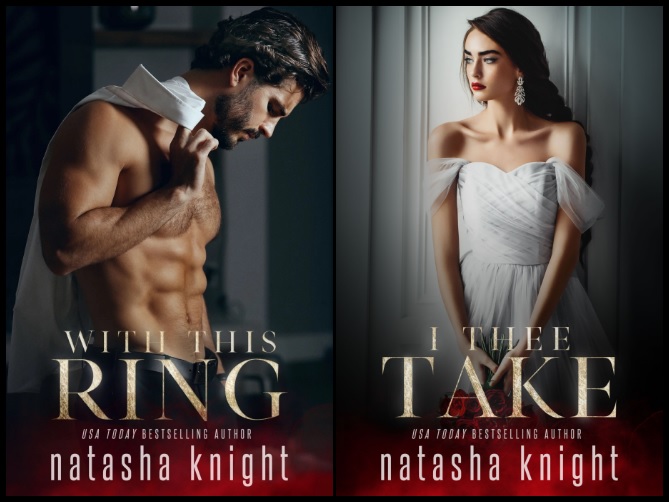 📕 Book One: With This Ring

She has sold over half a million books and is translated into six languages. She currently lives in The Netherlands with her husband and two daughters and when she’s not writing, she’s walking in the woods listening to a book, sitting in a corner reading or off exploring the world as often as she can get away.