She’s a figure skating prodigy. He’s a guy from the wrong side of tracks.

After dedicating her entire life to figure skating, Rei Mitchell-Nagasaki is ready for a little bit of normal. And what’s more normal than attending college?

Zane West has had a rough life, but he’s found his way out of Ashton Heights and he isn’t about to lose it all when the demons of his past come knocking at the door.

… that are about to collide on the ice.

Rei has one semester to show her father that she can have it all—a normal life and making it to the Winter Games—but it’s not so easy when there is a broody hockey player standing in her way. Once heated arguments turn into sharing the rink and late-night kisses, neither of them will be able to resist the pull.

Will they manage to defy the odds or was their love doomed from the very beginning?

Right from the very beginning this story had me engaged with that zinger of an opening scene between Rei and Zane… 🔥 *phew!*

If you adore sports romances, specifically hockey romances — this series is a must read. You can technically read each one as standalone books, but as someone who’s read them all, I can tell you now, you’ll want to read them in release order. The world-building from the first book sets the atmosphere not only within Blairwood, but amongst the friends, and from there it’s an ever-expanding world as you get to know more and more about each character in length through the books that follow.

Anna has kept it consistent with another character-driven story with well-paced storytelling as it delves into two opposite characters who find themselves having more in common than they first realized. The dual points of view was a perfect choice in sharing their story because you get in-depth insights into their relationship and compare where their heads are at on certain situations. Whilst Anna has already introduced some multicultural diversity when she first introduced these friends in the first book— Kiss To Defy is the first amongst them with leading characters who are POC (person/people of colour).

Although, both the hero and heroine are of colour, their different multicultural backgrounds alone wasn’t necessarily the biggest factor that was in the forefront of the story. If anything, it was mentioned more in passing as their overall social standing was more so the main obstacle in their budding relationship.

I connected with Rei fairly easily just from the description of her appearance alone. 😅 As a fellow Asian and a shorty to boot, Rei simply felt like someone I could relate and be friends with in real life. As the story progresses, you quickly discover with her personality she’s quite a likable character as well. She’s a person who’s ambitious yet yearns for some work/life balance by choosing to divide her time from skating with school and making friendships.

What I love about the books in this series is the dynamics amongst the friends, and this one was no different. It gave it a lot more dimension having all these secondary characters have some participation in creating layers within the story no matter how minor. In my opinion, Zane’s and Rei’s story was somewhat more sombre in comparison to all the previous couples that I found the few lighthearted moments throughout were refreshing breaks from the weighty issues that both Zane and Rei were dealing with. There’s just enough lightness and comic relief to keep their story from going too serious.

Please note this story contains some sensitive subject matter that may be triggering for some readers. It delves into addiction, domestic abuse, and violence. Recommended for readers of age only.

I do have to point out that whilst I found the majority of the friends in this story very agreeable, I did find one in particular I was not a fan of. I found them to be a little pushy, rude, in-your-face, and at times disrespectful of others’ feelings. I won’t be naming names for a couple of reasons, one being that this is a no spoiler review, and two, this particular character has a book in the works (if sources are correct), so I’m hoping that my annoyance of said character doesn’t go any further than this book and that in my eyes they’ll have some redeeming qualities. 🙏

The entire book was an enjoyable read, but I would’ve preferred more build-up not only in their relationship but in the overall storyline too. Yes, there’s quite a slow burn romance going that kept me on the edge of my seat, but the overall story felt like it lacked a little more oomph that the other books in the series had in spades. I found certain plots started out well enough but fizzled by the end leaving it a little anti-climatic, whilst other plots felt like they came out of nowhere that it left me a little taken aback.

I did however liked seeing no game-playing between Rei and Zane. They both knew they had a bond and it felt very genuine seeing them whenever they were together.

As I said at the very beginning, this is another great addition to the series. I think it’s a must read for those who have come to love the series and invested in seeing each character get their own story. I admit Zane wasn’t on my radar as much as some of the other guys, but after having read Kiss To Defy, I have a newfound respect for him. Despite his difficult upbringing, it’s never discouraged him from wanting a better life for himself and willing to work hard for it. He’s also quite a considerate gentleman— which he proves time and time again with Rei. 😊

What I also enjoyed about this story besides the slow burn romance between the two, is the vivid feature of both Rei’s and Zane’s perspective sports. Especially Rei’s figure skating. Anna has managed to put a lot of detail and sport “lingo” that wasn’t overly done or overbearing to read about. On the contrary, I found it all fascinating and at times felt like I was actually learning a thing or two about each sport. Both Zane’s passion for ice hockey, and Rei’s ambition in her figure skating career were evident and figuratively oozed out of the pages. Right along with the unwavering support they had for one another in achieving their goals.

Their romance was far from easy but it was sweet and, in the end, triumphant. What started out as a misunderstanding between the two ended up being such a solid relationship. They might have had differences, but Rei and Zane are undoubtedly perfect for one another. Anna has written another swoon-worthy couple whom I can look forward to seeing make appearances in future books.

This one in particular had a lot of elements and tropes included. If you like any and all in your romance reads, then I recommend you give this one a try.

I may have had a couple of hang-ups with some plotlines and certain characters in this book, but I can’t deny Anna’s writing style is effortless to follow and gets you invested in fairly early on. I love the consistency in effort and detail Anna puts into each of her books in this series that it’s hard not to want the next one right away.

Thank you Anna B. Doe for the opportunity to read an advanced copy! 💜

🏈 Read my reviews for the Blairwood University Series! 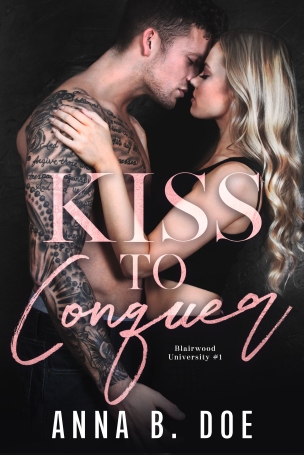 Prequel: Kiss Me First by Anna B. Doe

Book One: Kiss To Conquer by Anna B. Doe

Book Two: Kiss To Forget by Anna B. Doe