I was born with noble blood in my veins.

Heir to a powerful dynasty.

Temptations too dangerous to resist.

Until someone tried to steal it all.

Scarred and broken, I emerged from the flames.

The first item on my agenda? Make Ivy Moreno my wife.

Second? Bend her until she breaks.

😮😮😮 Holy book gods! I’m gonna need a minute. What did I just finish witnessing Ivy Moreno enter into with Santiago De La Rosa?! Sheesh. May the odds be ever in your favor.

I knew I wouldn’t be disappointed in another Knight/ Zavarelli collaboration. They always manage to conjure up some deviously twisted dark romance! Requiem of the Soul is without a doubt a gritty mindfuck of what-ifs and know-hows.

First off— the world building is so crisp, so vivid that you can’t help but imagine if exclusive societies such as this one exists in reality (and for that matter… are they as dirty and shocking as this one has been made out to be?!)

Trigger Warnings: It contains sensitive subject matter that may be triggering for some readers. Violence, non-consensual sex, and abuse occur throughout. Please take into consideration before starting it. For readers 18+ only!

This book is set in such a dramatic and intriguing atmosphere right from the opening scene that I was having a hard time putting it down even for a bathroom break. 😅 I happily read it in one sitting but after the killer ending it leaves you with, I was cursing for not having paced myself. I have now joined the ranks of my fellow ARC readers in saying, “I need book two now!” Ugh. 😭

It’s gripping, with a complicated captor/captive type, arranged marriage between a man who has the power to call all the shots, and a young woman who is determined not to break in the life she’s been forced into. I am hooked and utterly invested in seeing this through to the end!

It’s one of those dark romance storylines that has you narrowing your eyes, trusting no character in sight, and trying to figure out the direction the plot is heading. Putting aside the elusive world of The Society that has been richly described, there are a handful of characters coming and going who all seem to have their own agendas. For secondary characters they all have such strong personalities that it’s interesting to see the contrast amongst them whenever they interact. If you’re a fan of morally grey characters, you’ll get your fill from this one! I am absolutely itching to discover certain secondary characters’ stories, and that’s just one of the reasons why I found the world Knight and Zavarelli created so multifaceted— with its untold history and full of secrecy that’s just waiting to be revealed. There’s so many things happening from all different directions, yet they all blend together seamlessly to give you a grand picture of the situation.

“Some call us thieves in the night.”

A thrilling, fast-paced storytelling told from dual points of view. There’s a gradual build-up of suspense that’ll have you on the edge of your seat waiting for the pin to drop. Santiago De La Rosa is a larger than life personality who tends to lurk in the shadows that you almost think this is one of those stalker type, crime books. He’s a complex character. To be honest, there were times he gave me mental whiplash with his back and forth indecisiveness when it came to his game plan with Ivy.

Ivy Moreno is no better. I like that she has determination and I respect her ultimate reason for why she’s putting up with everything she’s enduring… but I wish she stuck to her guns a lot more. But putting those issues aside, I am truly fascinated by these two protagonists. Santiago oozes mystery… and craziness. Not to mention, when you discover the story behind his appearance, you’ll be all the more invested in seeing everything unfold.

I’m even more curious when it comes to Ivy. I’m really liking the fact that Knight/ Zavarelli has written in some diversity with their characters. Especially when the backdrop of this world is all about the pretences of perfection and certain expectations.

Besides the intrigue surrounding The Society, the sizzling chemistry between Ivy and Santiago is palpable. I adored their sweeter, more civil moments just as much as their fiery banter. They have a Beauty and the Beast meets Romeo and Juliet type of romance where a lot of factors are in play that I couldn’t get enough of.

You’ll be second-guessing decisions made, actions taken, and questioning whether or not these characters actually have any redeemable qualities in them.

Thank you to Natasha Knight, A. Zavarelli and Give Me Books Promotions for the opportunity to read an advanced copy! ❤

🌹 Read my review for the Ties That Bind Duet! 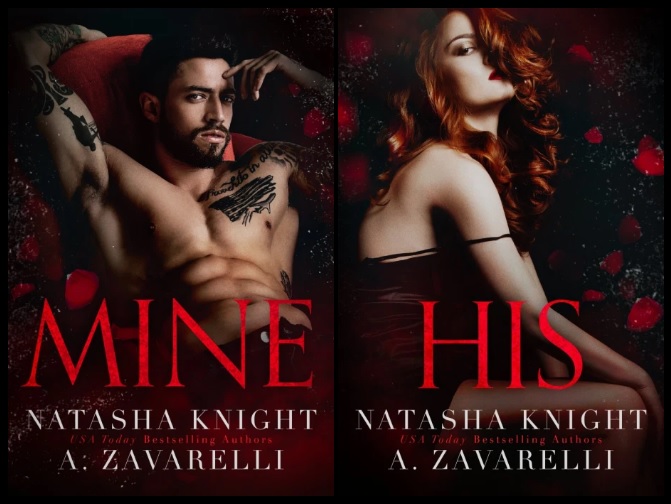 📕 Book One: Mine by Natasha Knight & A. Zavarelli

📕 Book Two: His by Natasha Knight & A. Zavarelli

Hope you’re all enjoying your week! Catch you in my next one! Xo