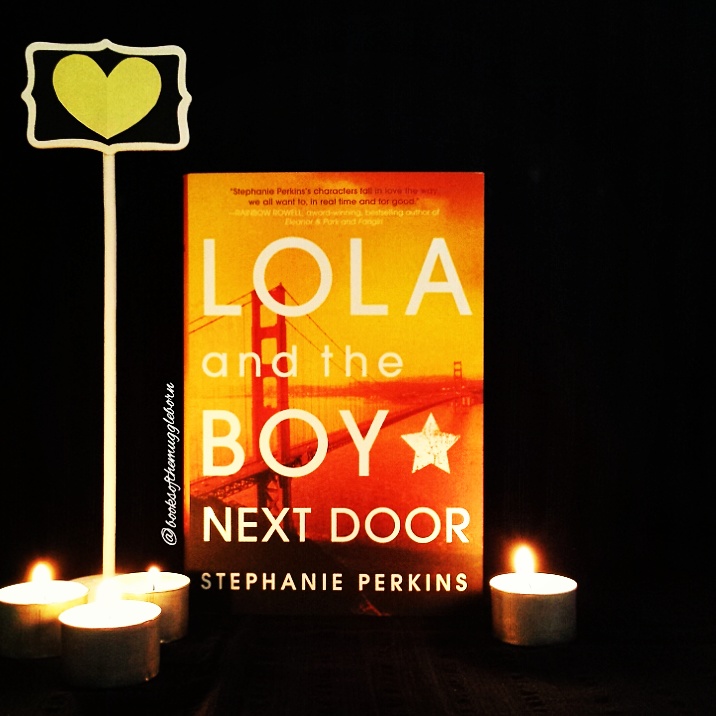 Lola Nolan is a budding costume designer, and for her, the more outrageous, sparkly, and fun the outfit, the better. And everything is pretty perfect in her life (right down to her hot rocker boyfriend) until the Bell twins, Calliope and Cricket, return to the neighborhood. When Cricket, a gifted inventor, steps out from his twin sister’s shadow and back into Lola’s life, she must finally reconcile a lifetime of feelings for the boy next door.

O My Goodness!! I am seriously loving Stephanie Perkins’ way of writing her stories! I am constantly smiling, laughing and talking at my book, saying things like “Nooo!!” or “Stop that!!” or asking questions like “Why??’ or “How could you?!?” just to realise that I’m really just talking to myself. I even had a couple occasions where my sister walked past during mid-rant and gave me a raised eyebrow. #Sighhhhh

After reading Anna and the French Kiss, I HAD to read the next installment. And boy was I just as happy with this one as the first.

Before I get any further into my review, I’m just going to say it now. I’m sorry Etienne. But you’ve been knocked off the “Perfect Fictional Guy” throne. Cricket is the MOST sweetest guy. Yes, he hurt Lola at the beginning (which ultimately hurt me too) but his persistence and never-ending love for her, even just as friends had me rooting for him until the end!

P.S. I’m just putting it out there… I still love Etienne.

I will say this though, Lola’s boyfriend throughout this book. What’s his name? Max. I actually liked him when he’s first introduced into the story. I thought he was caring and understanding of Lola and her family and whenever she was upset or if they had a disagreement, he was quick to apologize and make up with her.

How. Could. He. Be. Such. A. Douchebag?! My thoughts about Max did a complete 360. I wanted to punch him… for Lola’s sake of course. All I can say is good riddance!

Don’t take this the wrong way but I found Lola’s dad Nathan to be too much at times. Like, woah man take it easy, you know? Thank goodness for her other dad Andy.

Calliope (Cricket’s twin) – all I can say for most of the book was “What the heck is your problem, b*tch?!?” Excuse my language but c’mon what was her deal!??

But all in all, Cricket and Lola are MFEO! (made for each other). They just know each other inside out and even when they were apart, they still remembered things about each other.

Here is one of my fave parts from the book:

“So you believe in second chances?” I bite my lip.

“Second, third, fourth. Whatever it takes. However long it takes. If the person is right,” he adds.

This time he holds my gaze. “Only if the other person is Cricket.”

I highly recommend it. But read Anna and the French Kiss first coz they make a cameo in this story and it’ll be a lot easier to know what they’re talking about if you experience what they went through for their relationship.

Book One: Anna and the French Kiss by Stephanie Perkins

Book Three: Isla And The Happily Ever After by Stephanie Perkins